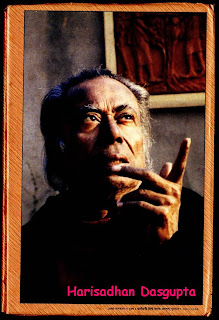 Hospitals are not the best of places to meet interesting people and forge friendly bonds with a person four times your age. Yet it was in a hospital room that I met Harisadhan Dasgupta – the doyen of documentary filmmaking in . He is much in news these days due to  reasons other than his filmmaking career-his wife Sonali’s affair with Rossellini and a recent book “Under her spell” by Dileep Padgaonkar in 2008, the ex-editor in chief of times of India.

Anyway, let us go back to summer of 1993. I was badly injured in a motorcycle accident and admitted in Woodburn block of , Kolkata. I shared the room with Harisadhan, whom I later started calling Hari dadu ( Dadu means Grandpa in Bengali to the uninitiated ). He was in his late sixties, quite infirm and desolate with loneliness and despair. I was eighteen and injured bad enough to be bedridden and operated into with no hope of recovery in six months. But the plight of illness did not stop me to get connected to him. Being a budding film buff with firm belief that European movies were far better than Hollywood counterparts though could not be denied because of its worldwide presence, in no time, we were chatting on movies, music and what not. Suddenly he asked me the name of Eugene O’Neal’s daughter married to Chaplin. As I said “Oona”, Hari dadu exclaimed “Now I have no doubt about your love for films.” And who knew those animated discussions would soon turn into a friendship- quite unusual between two men with half a century age gap. Yet we were friends discussing anything and everything under the sun. I used to talk about my friends, family, ambition, career, music, books…..and he used to listen to them intently and advise me on my career plans.

He used to tell about his past life, his movies, his celebrity acquaintances and his American experiences. His father,Dr.Biraj Mohon Dasgupta, was a renowned protozologist-the second Indian to become a director of of , . They had a sprawling mansion at Southern Avenue in . His father wanted him to be a physicist and sent him to during the Second World War to for higher studies. But his creative urge propelled him to where he learned filmmaking. He assisted Irving Pitchell in one of his films. In late forties and fifties, after returning to Calcutta, he started making documentary films like Tata Steel, Konark, A day in the life of a cigarette ( for ITC). And he was started to be called as “Hari S” by his friends as a result of his penchant for everything American. 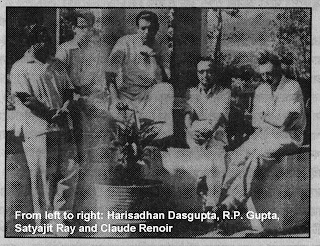 Because of his skills, he was Jean Renoir’s natural choice in to assist him in directing The River just after independence of . And his documentary film Tata Steel was a classic with script by Satyajit Ray, camerawork by Claude Renoir and music by none other than Pandit Ravishankar. He was a founder of film society movement. He used to earn well by making documentaries since most of them were financed by profit making business houses. At that time he had developed a rift with Satyajit ray regarding making a movie out of Rabindra Nath Tagore’s novel - Ghare Baire. He paid Rs.20000, a princely sum those days on account of royalty to Visva Bharati. But the movie did not happen since no decent producer could be found in . But the loss of money on his side caused a permanent rift between them which nobody bridged in future life. Even Satyajit Ray wrote about this in ‘My days with Apu’, a Penguin book. Anyway, in his long and eventful career, he made many documentaries for Films Division and private organizations and two popular feature films in Bangla- Eki onge eto roop ( Too many faces of eve, starred by Soumitro Chatterjee & Madhavi Mukherjee) and Kamal lata ( starred by Uttam Kumar & Suchitra Sen). Eki onge Eto Roop got a prize in Edinburgh film festival.

One night he was quite depressed. I inquired. He asked me “Can I tell you something adult ?”. Upon my affirmation, he started telling me his traumatic married life, how his wife Sonali eloped with the world famous Italian filmmaker Roberto Rossellini with his one year old son to leaving behind his elder son Raja. That was an international scandal and for his honor I refrain from divulging any details as it may hurt many still alive.

The scar this incident left was hard to be hidden. Though he raised his son Raja with his family’s help, and led a ‘clean’ life without getting any more scandal and media attention, sometimes his reflections on himself showed the deep despair he harboured within. But he was courageous enough to continue making films even after this debacle. In fact his memorable documentaries like Panchthupi (for Burmah Shell), Bade Ghulam Ali Khan and Baba Alauddin Khan were made after this scandal. Panchthupi was shot in a village in Murshidabad district of Bengal where he likened the homecoming of a rural married lady with the events of Durga Puja, a very Bengali tradition. Seeing Panchthupi, Amita Malik, noted film critic of The Statesman was ecstatic and went on to praise to the extent of comparing it to Pather Panchali. But sometimes I felt he was a pioneer who never read the sign of time. In the Naxal movement ridden turbulent 70’s when Satyajit Ray was making socially relevant Pratidwandi or Mrinal Sen, Kolkata 71, he was contented with a romantic Uttam-Suchitra starrer Kamal Lata, the last episode of the Sarat Chandra Chattopadhyay’s Srikanto series of novels.

Tragedy and sorrow never left Harisadhan. He lost his younger brother Bulu Dasgupta, a talented cameraman during shooting of Panchthupi by lightning strike while taking a shot of thunderstorm in an open field. “Keno chokher jole bhijie dile na sukno dhulo joto (o lord , why did not I soak the dust of your path by my tears?)” was his favorite Tagore song that always consoled him. I remember him singing this song tearfully quite often. Due to Sonali’s departure and ensuing scandal, his brother Bulu’s death, he used to think of filmmaking having an ominous influence on him in later part of his life and tried to keep his son Raja away from films. But as luck would have it, Raja Dasgupta went on to become an independent filmmaker and his grandson, Birsa has also joined filmmaking bearing the legacy of his grandfather. When Raja Dasgupta made his first documentary on the Santhal leader Birsa Munda during his college days, he told me, he was secretly happy though he expressed disapproval publicly. How could he say no when he himself devoted his life to movies? And many of the noted filmmakers like Gautam Ghosh, Buddhadev Dasgupta, K.Bikram Singh were helped by him in their budding years. He helped Bangladeshi filmmaker Zahir Raihan a lot during Muktijuddho in 1971. I remember Goutam Ghosh fondly, coming to meet him almost everyday.

My stay was going to end as I was operated on and released. But my association with Hari dadu continued through letters, which I have kept as fond remembrance. Then he was released from hospital. He visited our house at Bhabanipore once. He gave me a long list of ‘must watch’ movies which I still cherish. He was in high sprits then and was planning for a movie again. He wrote a script of a feature film which he showed me once, but a rank bohemian that he was, he did not stay back in Kolkata. He went to Santiniketan. We exchanged letters but slowly his reply trickled off. I became engaged with my college life, movies and friends. One day in September, 1996, all the leading dailies of Kolkata reported his death in an obscure village near Santiniketan, . His silent departure reminded me of a sentence “We carved not a line and we raised not a stone but we left him alone with his glory”; from an old poem “The burial of Sir John Moore at Corunna”.

Note: This blog written by me first appeared in Passionforcinema.com in May,2009
Posted by Biswa Prasun Chatterji at 21:29